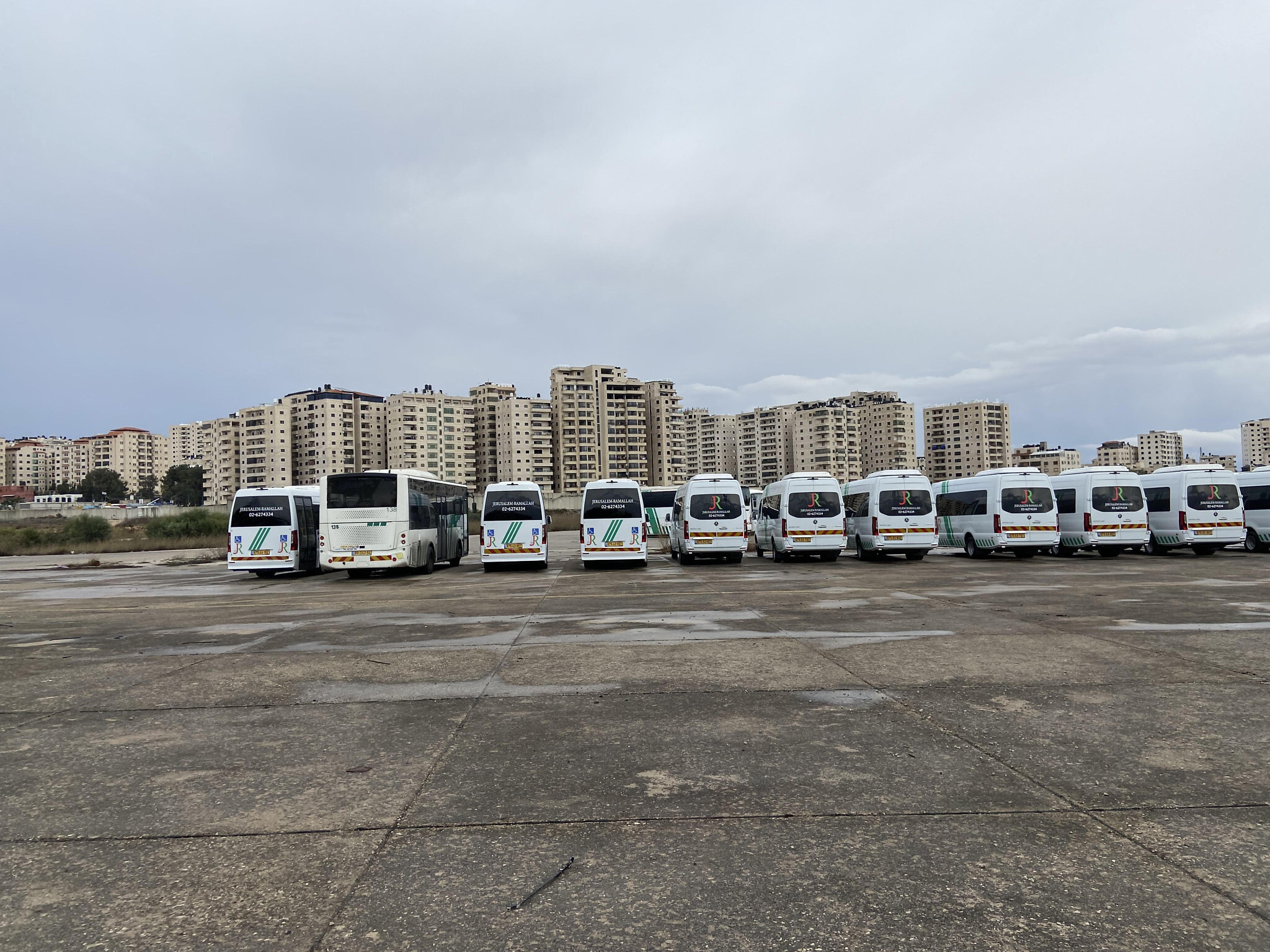 There’s often quite a bit of confusion around East Jerusalem buses, their routes, and their timetables, but we’re here to clear that up. The top three reasons you’ll want to hop on these bus lines are:

Well, it’s rather apparent, but these bus routes go to East Jerusalem neighborhoods. In addition, you can take a bus line from Damascus Gate to Ramallah, Bethlehem, or to connections for Hebron, Jericho, Nablus, Tulkarem, et al.

Most of the bus lines operating through East Jerusalem work seven days a week, 365 days a year – yes, including Shabbat and Yom Kippur (but on the latter, they adjust routes to avoid predominantly Jewish-populated areas of the city). You’ll find that the buses run early in the morning to late in the evening, typically between 5:30 am to 10:30 pm. There is often an extended night schedule during the month of Ramadan.

How to Use The Bus

Payment can be made on the bus in cash (5.5 shekels – change is available for smaller amounts) or by using a national transit pass, known as a ‘Rav Kav’, and scanning it upon entry. There is no option to scan a QR code or pay by an app at the time of publishing (August 2022). If you’re using a Rav Kav, you can easily transfer between any bus and the light rail. If you paid cash, keep your receipt as proof of purchase –  you can typically use this up to 90 minutes from when you first started your trip to transfer to other East Jerusalem buses only.

Riding the bus can be a different experience depending on the day, time, route, and destination. Generally, you’ll find it common for men to give up their seats (without being asked) for women, and young adults will give up their seats for elders. Although there is no particular dress code, it is best to dress at least somewhat modestly (say, avoid crop tops and shorts). Speaking of modesty, exhibiting respectful behavior (not speaking loudly, for example) will benefit you.

Knowing when to get off – pay attention to the automated system in the bus, which will typically announce stops. If there is none (or it’s hard to hear/understand), follow along live with a mobile app like Moovit.

Getting off at your stop can be done by pushing a button. On some buses, you’ll push the button on the side of one of many vertical poles within the bus. On others, look directly above your seat – they’ll typically be yellow in color or the biggest button.

These bus lines originate from one of three clusters between Damascus Gate and Salah a-Din street in Jerusalem, all of which informally form an expanded area colloquially known as the ‘East Jerusalem Central Bus Station.’

The 206 bus line passes Ras al Amud to Jabal Mukaber and Al-Sawahra al-Gharbiyye. It takes a similar route to that of the 205 bus.

The 207 bus goes through Sheikh Jarrah, passes French Hill, goes through part of Shuafat, and ends up in the Shuafat Refugee Camp.

The 218 is an express bus from Damascus Gate to Ramallah. It goes through Sheikh Jarrah, passes by Beit Hanina, Pisgat Zeev, Neve Yaakov, Kafr Aqab, and Qalandiya.

The 226 passes by Wadi Joz and goes through At-Tur.

The 231 passes by Abu Tor, Talpiyot, Beit Safafa, and through Beit Jala and Bethlehem.

The 232 passes by Abu Tor and Talpiyot, and goes throughout Beit Safafa.

The 234 passes by Abu Tor, Talpiyot, Beit Safafa, and ends at Checkpoint 300.

The 246 is a route that goes between Qalandiya Checkpoint and the Atarot Industrial area.

The 254 passes through Sheikh Jarrah, Shuafat, and Anata.

The 255 passes through Sawana and A-Tor.

The 256 passes by Ras al Amud and through Silwan.

The 263 passes through Wadi Joz, Izariya, and Abu Dis.

The 273 goes through Sheikh Jarrah, then straight on to Beit Hanina and then Qalandiya and on to Ramallah.

The 276 is a bus route that primarily goes through Abu Tor/A-Thuri, passing through Silwan along the way.

The 286 goes around the Old City, as well as through parts of Silwan and Abu Tor (A-Thuri).

The 287 is a bus line that primarily acts as a shuttle through Wadi Joz.

Looking to get to the airport? Check here for transportation to Ben Gurion Airport. 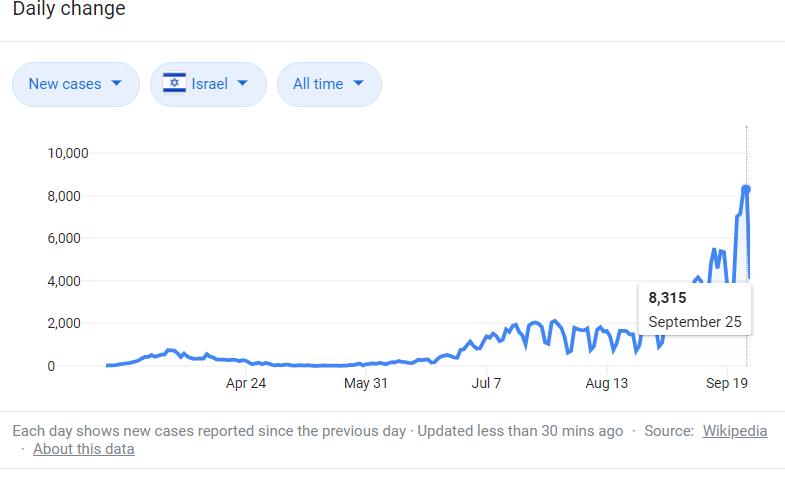 Nearly one million people have died around the world from Covid-19, and Israel’s death count is quickly closing in on 1,500 grandparents, parents, and children who have passed away due to complications stemming from the coronavirus. 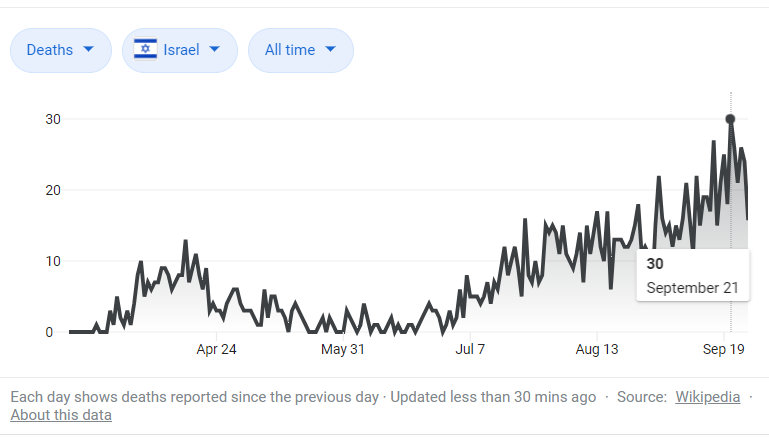 When the pandemic showed itself to be a globetrotter, Israel was one of the first countries outside of China to clamp down on its residents, in efforts to stop the virus in its tracks. It began as a beacon of light and an example unto the nations on the effectiveness of lockdown and strict measures could be the best way to keep citizens safe. However, that glow of success quickly faded away from a bright, guiding light and turned red.

Enough people thought that because the country reopened following the first lockdown that the risk of the virus was over or not as serious as initially thought. Well, that mindset is what has led us into a second lockdown.

The demonstrable science is simple: wear a mask, wash your hands, socially distance, and we’ll be good in a shorter amount of time than without those measures. If only we actually knew what life would be like if people lived by science.

Here are the lockdown rules this time around (from the Ministry of Health guidelines):

Regulations for the Holiday Closure 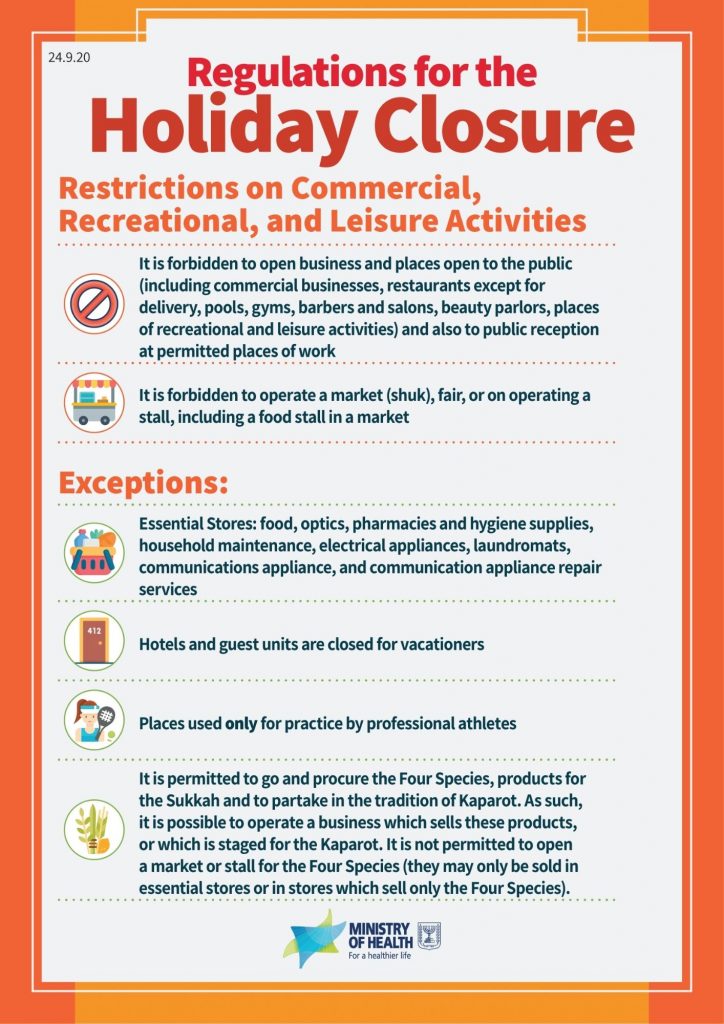 Business Closed to the Public: 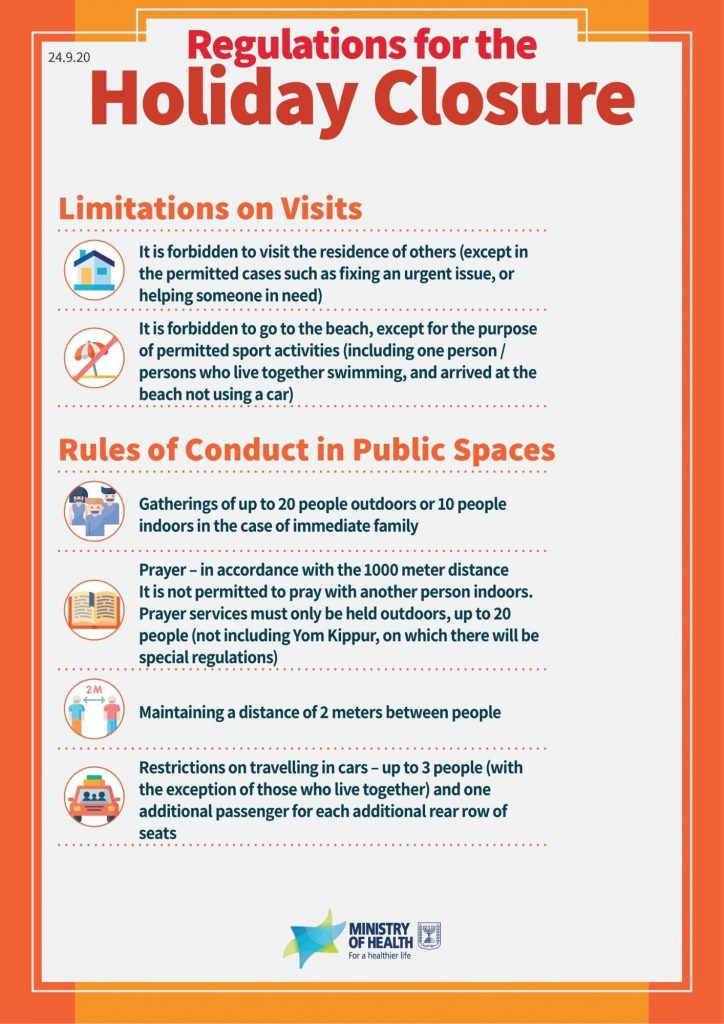 Rules of Conduct in Public Spaces 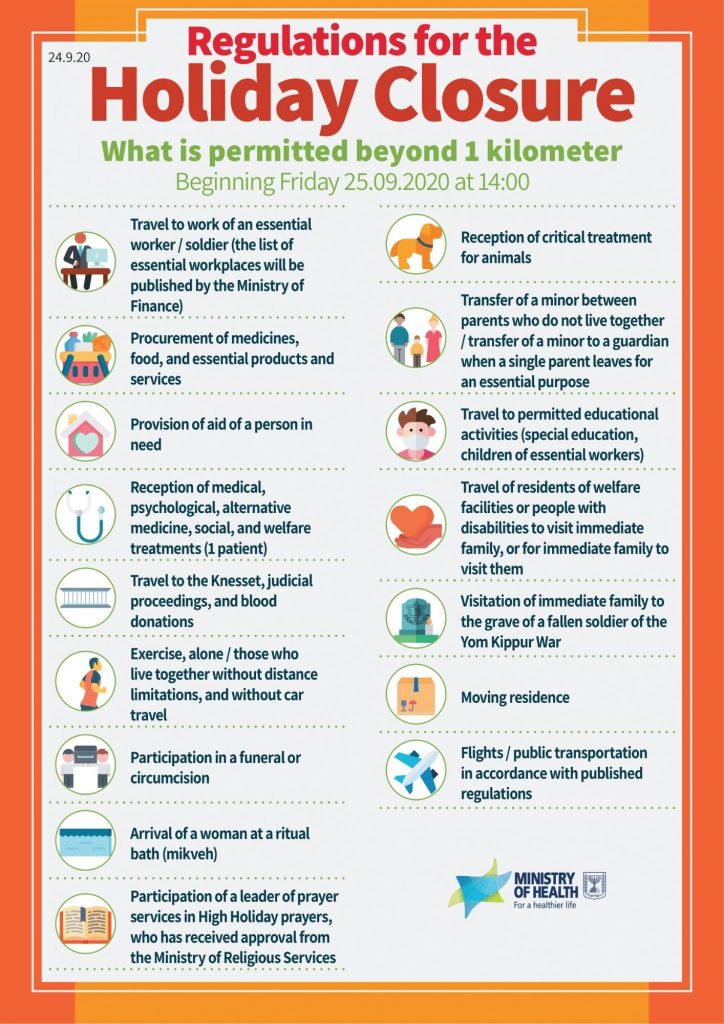 What is allowed beyond 1 kilometer from your residence?

What’s the Status of Covid-19 in Israel?

According to statistics presented on data.gov.il, 10.4% of all SARS-CoV-19 tests conducted between August 15th and September 24th, 2020, were positive for the virus.

Of those tested, 88% of results confirming coronavirus infection were in people under the age of 60 years old.

Symptoms included in the dataset were: 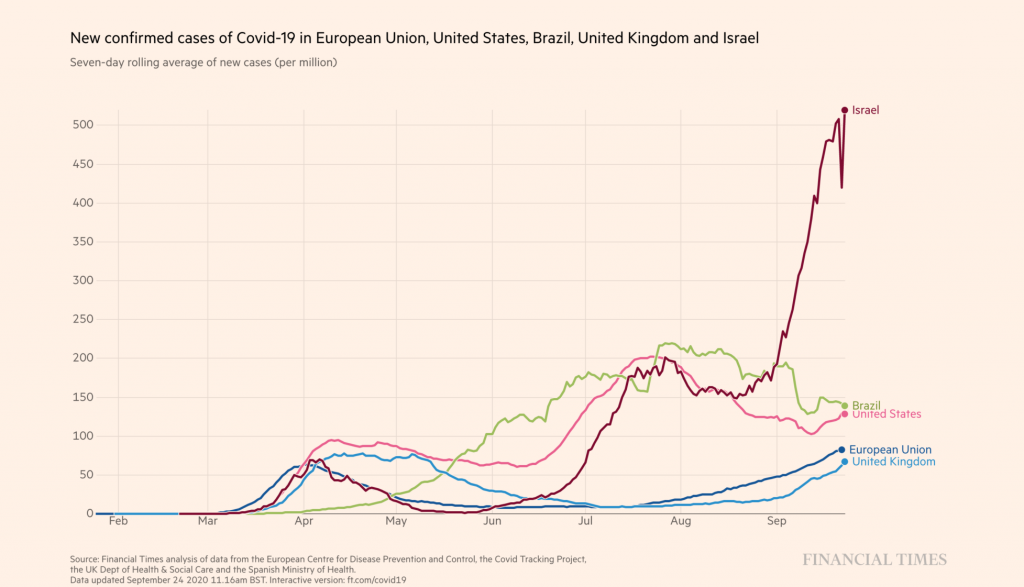 According to a Haaretz report published on July 13, 2020, Dr. Amir Onn, the pulmonology oncology chief at Sheba Medical Center, “said that with most infectious diseases, recovered patients can soon resume a normal life, but with COVID-19, the lingering symptoms tend to be more significant.” Just because you made it through, it doesn’t mean it’s over. In the same report, they spoke with ‘recovered’ patients of Coronavirus, including:

Niv Dashat of Tel Aviv, 27, also lists a host of symptoms she still experiences since officially recovering in April. “I still get a rapid pulse,” she says. “My sense of smell isn’t back to normal, and sometimes I feel dizziness even when I’m resting, along with unexplained fatigue.” Dashat, who is training to become a Pilates instructor, says she was in excellent physical condition before she became ill. “Today when I run it’s very hard for me to breathe,” she says. “I’ve also experienced drops in blood pressure. I absolutely don’t feel the same as I was before.”

Sidebar Some food for thought: The World’s poorest-performing countries when it comes to the Pandemic are led by right-wing populists and “self-centered authoritarians.” (Haaretz)

What’s the Status of Covid-19 in Palestine?

The Palestinian Authority governing body was quick to shut down schools and parks at the beginning of the pandemic. They had a number of cases in Bethlehem initially, and were swift in putting the towns with a cluster of cases under lockdown. Nonetheless, Palestine has seen a growth in cases over the latter half of the summer season, just like Israel. 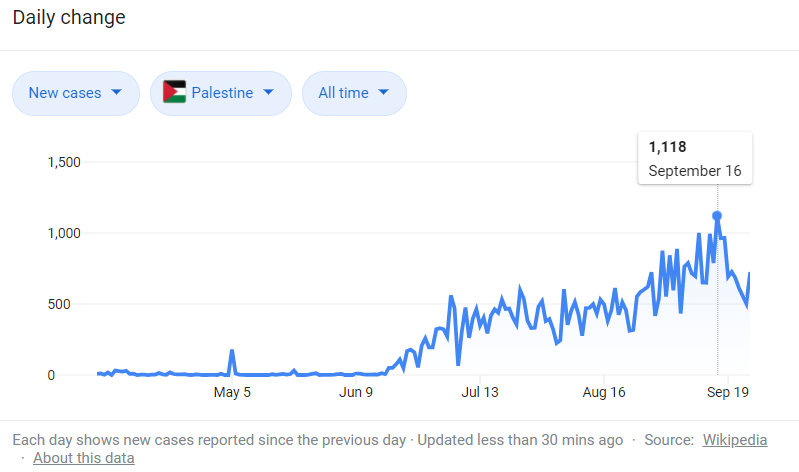 The deaths per cases rate for Palestine, according to the latest available data, currently stands at 0.67%, with the current death count at 322. This is compared to Israel’s 1,466 deaths, but very similar 0.64% morbidity. 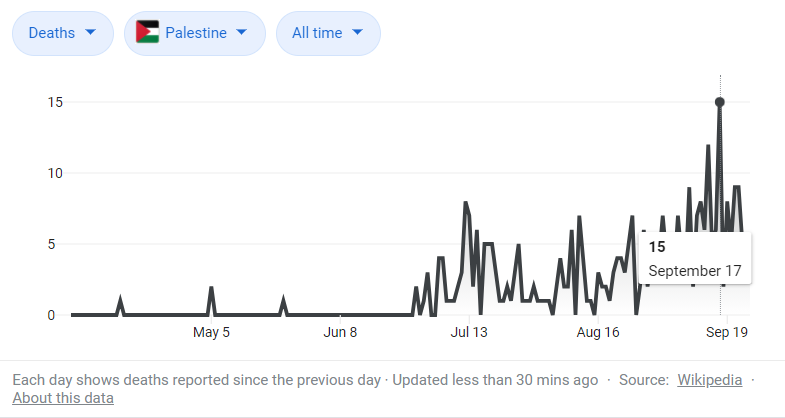 The United Nations published the following infographic on September 3rd, 2020:

The vast majority of Coronavirus cases in Palestine are located in the Hebron area, according the the Palestinian Authority Ministry of Health. People under the age of 30 account for 45.9% of Covid-19 positive test results in territory under Palestinian control.

Have a happy harvest festival season and healthy, safe lockdown. Don’t forget to wear your masks and socially distance! 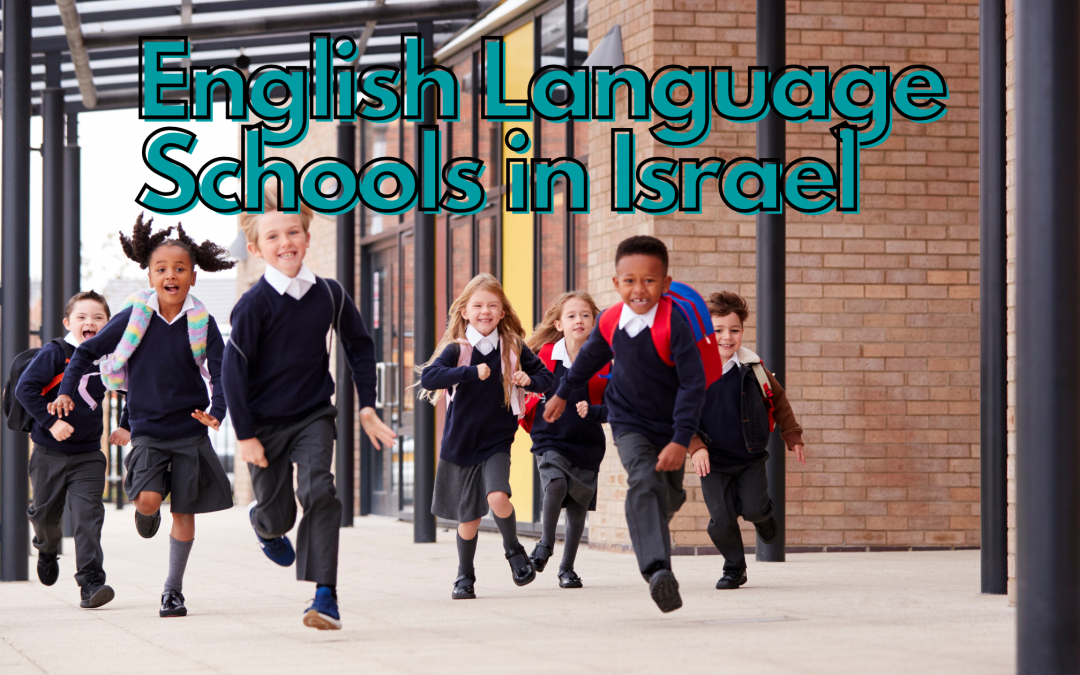 Finding the right school as an expat can genuinely make or break your child’s academic experience. Most schools in Israel either teach in Hebrew or Arabic. However, there are a few schools throughout the country that do provide instruction in the English language. If you’re looking for English schools in Israel – whether it’s an elementary school, middle school or junior high, or high school experience, I’ve compiled a comprehensive list of those institutes. These are all full-time programs whose primary language of instruction is English, whether American or British. If I missed one, let me know in the comments section below!

Is it possible to have a genuinely pluralistic and integrated school that addresses the local dynamic while providing quality education? Absolutely! Givat Haviva fosters a Shared Society environment, where the students are intentionally made up of equal parts Palestinian, Israel, and international backgrounds. One of the best things about this school is that they openly state that no qualified, admitted student will be turned away due to an inability to pay for tuition. They actively seek donations to cover the expenses of students from disadvantaged backgrounds.